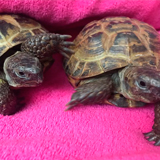 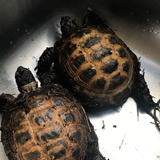 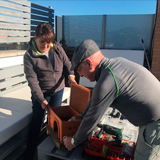 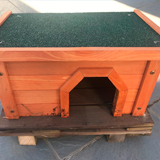 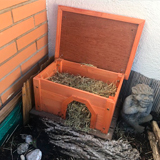 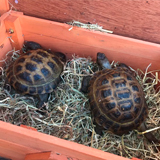 So, it appears that the new house mummy bought for the boys and her latest Amazon purchase, was not entirely waterproof. Admittedly, mummy was a bit skeptical when she put it together – firstly that it was supposed to fit rabbits, as it was really rather on the small side and by next year even the boys won’t be able to fit through the entrance – and secondly, as it had no bottom. However, the wooden fruit crate Txomin and Arthur hibernated in last year also had no bottom and they were cozy and dry throughout, so mummy was not unduly concerned.

Fast forward to a week into sleeping in their new home and having had some super bad storms and it was apparent that things were not going to plan. Taking a sneaky peak inside, mummy found the boys caked in mud (mixture of soil, hay and orchid bark inside house), damp and not amused at being dug out and woken up. Half an hour later, after a warm bath and a snuggle on mummy’s lap, the boys were clean, awake and put in a box in the shed, whilst mummy figured out what to do with the house.

Mummy’s in-laws were visiting a few days later, so she enlisted them in helping to put a bottom on the house to ensure no water could seep in from underneath. Mother- and father-in-law added a couple of legs to give it even more height off the ground for good measure and the house was looking pretty good. Mummy duly put the boys inside and left them to snuggle down.

Two days later, checking to see how they were doing, mummy was concerned to find the house completely empty. After some searching, she found Txomin inside the small broken plant pot hide-out and after another long look, an uprooted plant and mound of soil with some of Arthur’s shell visible. It appears that the boys are not impressed with their new house and would rather rough it and face the elements. Mummy is going to have the re-think the housing situation for the rest of the winter, perhaps a few decorations may help it become more appealing...