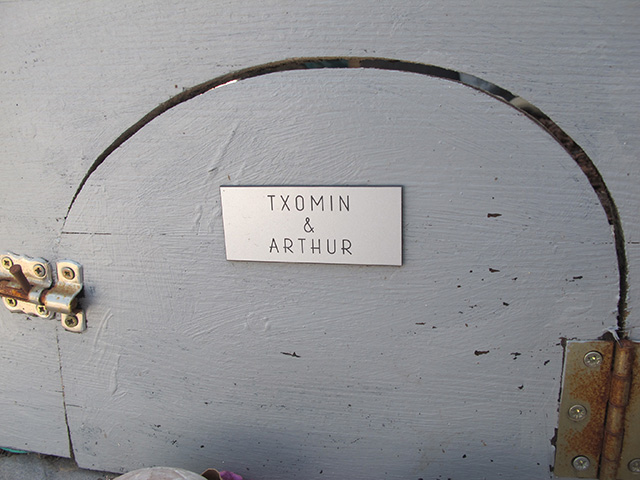 One day mummy was at the cobblers re-heeling some boots when the small letterbox name plaques caught her eye. “How much were they?” she asked, “€14” replied the nice gentleman fixing her boots. “Is it for a letterbox?” asked the nice gentleman, “er no” said mummy “it’s for my tortoises.” The nice gentleman pulled a face, perhaps thinking he had misheard. “Tortoises?” he asked. “Yes, for their house” mummy responded.

It seems that perhaps having a silver name plaque on your tortoise house is not very common in Montgat. However, he obligingly asked what she would like written on the plaque whilst mummy very carefully considered her font options – as it had to be just right.

A week later, when it arrived at the cobblers, mummy’s nephews were staying with them, so she took them and lovely daughter to pick up the plaque. She swore them to secrecy regarding the price of said plaque, but should have known better. The 3 of them could not wait to tell Tío Aritz (aka loving husband) that Tía Claire (aka mummy) had spent €14 on a plaque to stick on the tortoise’s house. She should have tried harder or perhaps even bribery, but she knows for next time...

The plaque was duly stuck onto the front door of Txomin and Arthur’s house and is a source of conversation for visitors, who find it amusing that tortoises firstly have such a large house and secondly, have their own opening/closing door complete with name tag.

Mummy’s not even sure Txomin and Arthur have noticed, but she thinks it looks great!