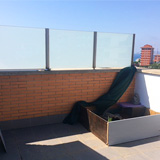 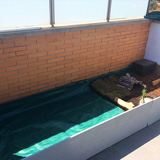 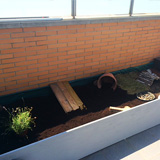 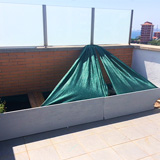 It has to be said, that even mummy was forced to agree that there is a very large disadvantage to tortoises having the free rein of your terrace. It’s not the frights when you nearly stand on them, or think you’ve lost them, or find they’ve eaten stuff they shouldn’t have. No, it’s the amount of mess they can make. Seriously, as mentioned in cacas , tortoises do large, messy cacas and lots of them. Their urine also makes quite a mess and if left long enough, will corrode patio slabs.

Anyway, one day, loving husband happened to stand in a rather disgusting caca, whilst wearing his espadrilles. Let’s just say he was not a happy camper and the tortoises free run of the terrace came to an abrupt end. Mummy, fearing Txomin and Arthur would become miserable confined to small and square house number 3, asked if they could come to a compromise. If they were to extend the house, then she would agree to no longer giving access to the rest of the terrace.

And so work began on the extension, entailing; more treated and painted wood, more breathable plastic lining, more soil, more reptile bark, another plant pot for hiding and even a special area for growing food for the tortoises. According to loving husband, the tortoises now lived in more square meters in relation to their size, than they did! Everyone agreed though, that having the rest of the terrace caca-free, was worth it.

Fast forward to March 2018, when the tortoises had come out of hibernation and mummy realizing that the tortoise house doesn’t get any sun... Perhaps, she suggests, they could just cordon off a small area of the terrace with a piece of wood (provisionally until loving husband comes round to the idea and mummy can put up pretty trellis fencing) so that the tortoises would not be cold and could sit in the sun until the warmer months and the sun moves over their house. Now, how to increase the cordoned off area – mummy needs to put her thinking cap on for that...