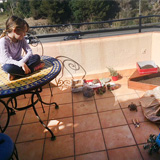 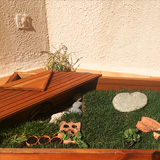 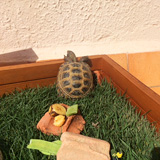 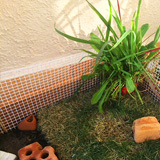 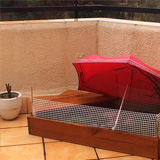 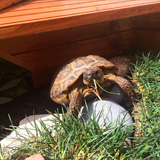 Mummy and lovely daughter set about putting the house together. Being that it wasn’t actually that big and there wasn’t a lot to it, it didn’t take long whatsoever. Perhaps mummy had set her expectations rather high as to how she expected the tortoises to react to their new abode. She was therefore, disappointed by their apparent lack of interest and refusal to move from the exact same place where she had placed them.

Mummy was to later learn that having purchased them in the second week of February they had perhaps been forced out of hibernation early. Therefore, it was likely they still weren’t 100% awake and were also perhaps rather miffed at being woken before they were ready.

It quickly became apparent that when they are fully awake, tortoises are actually quite good at climbing, extremely curious and determined. When they decide that they would like to escape from their house, they really put their mind to it. It wasn’t long before mummy had to rush to the local DIY store for some rigid plastic netting to put around the corners of the tortoise house as Arthur appeared intent on getting out. The fencing went up and Arthur now began trying to dig under it as well as climb up it.

Perhaps mummy would have to broach the subject of a larger house to loving husband, though she would have to choose the right moment...