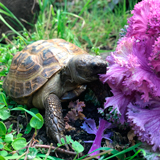 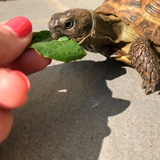 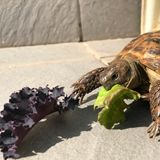 Hooray! The boys have finally woken up. After a nice long soak and lots of cuddles with mummy (under duress on Arthur’s part), it’s time to get back to their daily routine and life out on the terrace. Due to the fact their house does not get the sun for another month or so, they have been given a few extra meters of terrace space to bask and to make a mess of. Loving husband will not be amused when he sees just how messy they have made it over the last couple of days. Mummy is thinking of wearing wellies when she next goes out there – so much mess from such small shelled friends!

Anyway, mummy digresses. On waking last year and indeed the previous year, the boys took between 7-10 days to get their appetites back. Not this year. The very next day, both Txomin and Arthur were munching away at homegrown veggies and weeds – including kale which proved a great hit. You may recall, that whilst asleep, mummy did a make-over of their house, which included some planting. One such plant, a gorgeous purple cabbage, proved rather too delicious and within 2 days, had been reduced to just a few sad looking leaves, which have no doubt been scoffed up since mummy last looked. So, note to self, stop trying to grow food items inside their house, other than the weeds etc. that grow and re-produce by themselves, as the boys are porkers and will gorge until they’re gone and still be hungry enough to eat all the actual food dished out and still ask for more!

So, it’s off to the garden center for mummy. Lovely daughter will no doubt complain again, that as soon as the flowers bloom they are quickly de-headed and fed to the boys…….. It is true that pretty much everything growing on the terrace is destined to be tortoise food – pampered? Shell yes!