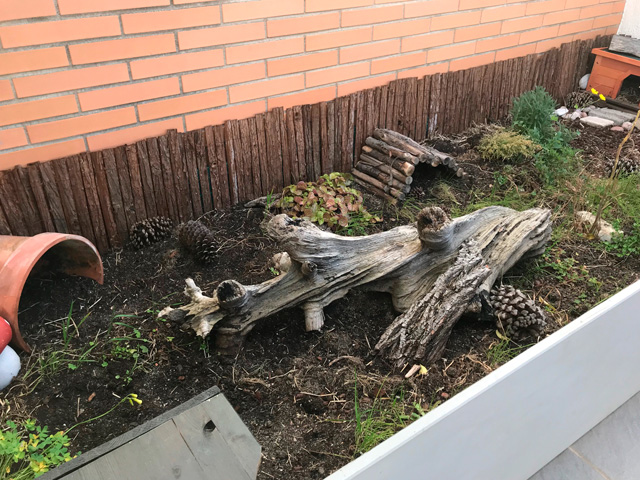 So, mummy is getting a bit impatient. The boys are still fast asleep!

As you will recall, Txomin and Arthur kept escaping from their new chic house, all pretty and shiny, so she finally had to dig them up from their very unsuitable hiding places where they were getting wet and put them in a much shabbier IKEA fabric box (previously used for shoes!) where they promptly snuggled down and went to sleep. Epic fail on the Amazon purchase, though mummy hopes they will get used to it during the spring and summer, so will not sulk and refuse to sleep there come next winter.

Anyway, every couple of days, mummy due fully goes out to the shed, buries under the mud and straw and gently pokes the boys a bit. On hearing Arthur snort at her and seeing both of them very slightly and ever so slowly move their legs just enough to show mummy they are still alive, she breathes a sigh of relief. However, she is getting quite impatient – she misses going up to the terrace and seeing the boys come running over when they hear her footsteps. She misses chatting with them both and having an excuse to sit out for a bit and catch the breeze. She has also had quite enough of that feeling of anxiety when she first peers in the box and holds her breath just for a second, hoping that she is not going to find either of them not breathing.

The dandelions are out in full bloom and mummy has done some work on the tortoise house, which now boasts super wooden fencing all the way round and looks rather elegant if she does say so herself. So, hurry up super warm weather and “wake up Txomin and Arthur,” mummy is missing you both way too much!