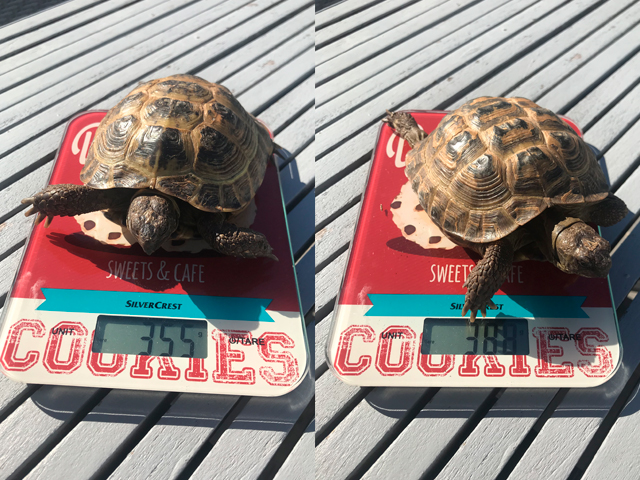 It’s that time of year again, when the boys have become sluggish, stopped eating and are getting ready for hibernating. Not even strawberries could tempt Txomin and Arthur to eat, so mummy knew it was getting serious and that nap time was fast approaching.

Last year she completely forgot to weigh them before they went to sleep, but this year she was prepared and lovely daughter was more than happy to get out the baking scales and help with the weigh-in. Tortoises, even when nearly asleep, are still not very compliant when they don’t want to be. How hard could it be? Put the tortoise on the scale, read weight, done. Wrong. Put the tortoise on the scale, try to ensure tortoise remains on scale, rescue escaped tortoise and replace on scale, give tortoise a telling off for lifting limbs in order to weigh less (yes, even tortoises are vain – mummy is referring to you Arthur!).

Finally, the results are in. Txomin, not surprisingly, weighs more than Arthur. Txomin is a solid 388g and Arthur, 355g. That’ll be down to all the food Txomin regularly steals straight out of Arthur’s mouth! Hopefully once they get on the scales again after hibernation, they won’t have lost too much weight – the countdown begins – now mummy’s next job is to quickly get a new house ready for the boys to sleep in, as the old fruit crate has seen better days and you know mummy, any excuse for an exciting Amazon spending spree...