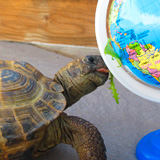 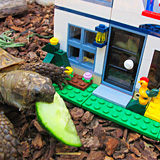 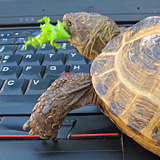 With a bit of food, they can be coerced into remaining on the same spot - until exactly the moment the food has been eaten. In order to take some of the more amusing photos for the site, mummy spent quite considerable time on all fours, feeding and posing the tortoises. She took an absolutely ridiculous amount of photos, to end up with about 5 decent ones.

When they weren’t trying to eat the plastic flowers off the Lego house, or the yellow plastic picnic cutlery, they were trying to eat the green paper names tags or leave icky caca remnants on the keyboard. Arthur tried to eat the red mouse buttong on the Thinkpad, the camera strap and they were only interested in the plastic globe when mummy attached a piece of escarole to it.

All in all, they were quite uncooperative and fought over the food and chased mummy round whilst she was trying to get the right camera position. Loving daughter was happy when mummy got the tortoises, if only that it meant mummy stopped chasing her around taking photos at every opportunity. Mummy much prefers a wriggly 8 year old to two 10 year old Russian tortoises, that’s for sure!