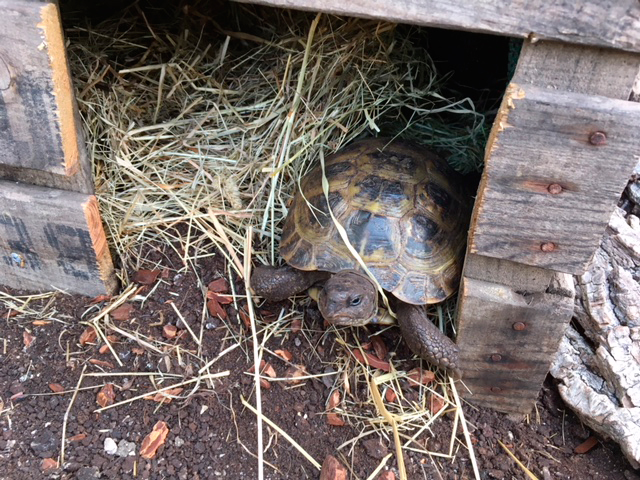 So, mummy remembers years ago watching Blue Peter and seeing the tortoise being put into a box full of newspaper, going to sleep and waking up some months later. She had also read quite a bit about it on various reptile and tortoise sites, however, she decided to take them to the vets in October, give them the once over and ask for some advice from an expert. After getting over the shock of finding out Doris was a boy – hence the name change to Txomin, mummy was happy to hear that both the boys were healthy and parasite free and would likely decide themselves when they were ready to sleep.

Being that they are both porkers, it was actually much easier that mummy had anticipated, as she would see a clear change in their eating habits and that they started to leave food they previously would have wolfed down. They began to walk more slowly, take less interest in food, do less cacas and leave their house less and less. Unfortunately, all this happened around the same time that mummy, loving husband and lovely daughter were due to move house. In fact, on the day of the move, mummy went into a complete panic when she could only find Txomin sitting inside his hide house, but there was no sign of Arthur. This was followed by a mad panic and mummy pulling up all the grass in their enclosure, to finally find Arthur cosily snuggled up underneath fast asleep.

The boys therefore, were transferred to a high-sided wooden vegetable box, lined with mud, newspaper and straw, which she left for the next 11 weeks in the shed – which has no door, so air could get in, but rainproof so they wouldn’t get wet. She regularly checked on them, mostly with a sense of dread if she was being completely honest, worried that they wouldn’t be breathing, but they both survived their first winter at the Aranguren Smedley household and would sleepily peep or move slightly when she prodded them – just to check.

It did take 1-2 weeks for them to properly wake up once they’d finished hibernating and they were groggy, didn’t move a lot and it seemed to be a huge effort just to ‘be’. Mummy bathed them daily in warm water to get their body temperatures up and moved them to the sunnier part of the terrace to bask. They slowly began eating and investigating –being that they had moved house when they went to sleep, it was quite exciting to see them investigating their new home which had been built in time for their waking up. It didn’t take them too long before they started munching away and leaving their ‘mark’!