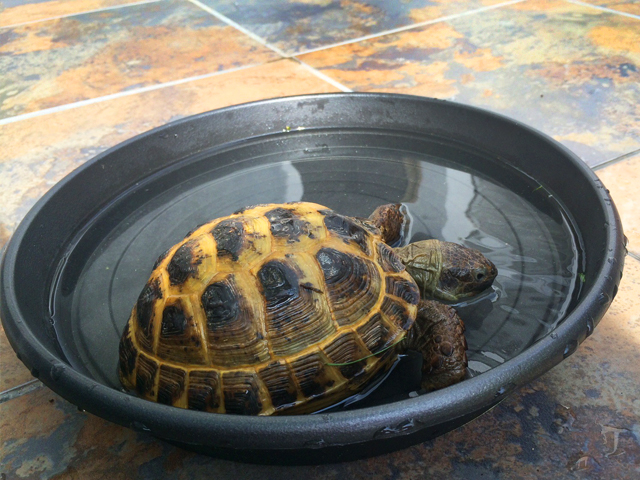 Txomin and Arthur are not keen on water whatsoever. They only enter their water bath when mummy teases them with food on the other side of it and they are forced to walk/run through it to reach the prize. In the two and a bit year’s they’ve been members of the family, mummy has never once seen them take a drink from the bath which always has water in it, or climb in it willingly.

Mummy therefore, forces them to have a bath or a shower. She puts them in a bowl of water at least once a week for approximately 15 minutes and every other day in the summer. She also sprays them on the soft spray with the hosepipe. On these occasions, they do start to wash themselves or put their heads under the water for a bit, but it is under duress.

One thing about baths is that it generally causes the tortoises to empty their tummies – so nice clean water, suddenly gets full of wee or caca. Mummy generally tries to keep them in long enough for them to do their business, as it’s less funny to take them out and then they do it and on occasion stand in it and the bath needs to be repeated!

Their shells shine rather nicely when they’re wet as they can actually look quite dull or dusty if they’ve been digging around in the mud. It’s important however, not to use any type of polish or wax to shine their shells. When bathing them, mummy has a soft toothbrush which she uses to clean gently their feet and shell and cotton-buds around their necks and tails.

When mummy first saw their peeling necks, she was a bit worried and not sure whether it was because they were dehydrated, but was relieved to find out from the vet, that as they grow, they shed their skin, especially around the neck area, so it is quite normal to see small pieces of skin coming off, but you should never try and pull it off or remove it.