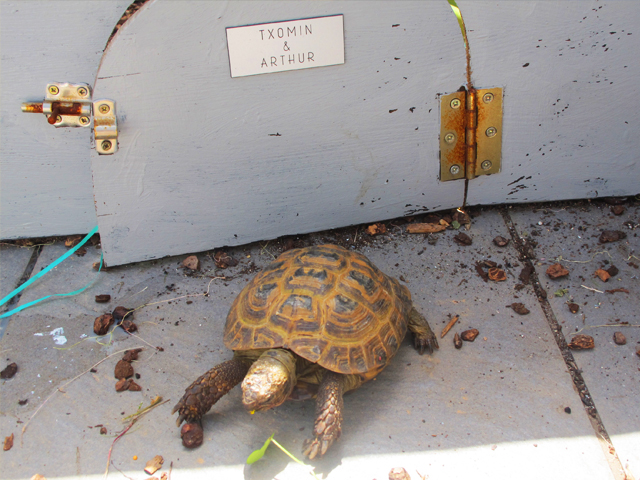 So, mummy had chosen Doris and Arthur after her grandparents on her dad’s side and thought they were quite fitting ‘old’ people’s names the two new additions to the family.

Fast forward 8 months and their first visit to the vets. Mummy wanted to give them both a check-up before they went into hibernation and see if they were indeed 8 years old as stated by the pet shop owner when she bought them.

Upon seeing Arthur, the vet confirmed yes, according to the rings on his shell, it did indeed look like he was around 8 years old. He was deemed fit and healthy and in fact, didn’t even have the stomach parasites that they can often have, so mummy was well pleased.

Now it was Doris’s turn and the conversation went along the lines of:

Mummy “Er no, she’s a girl and called Doris”

Vet “Er no, this is a boy and though he has a thinner tail than Arthur, he is most definitely a boy. I will get my colleague to come and have a look as he has tortoises of his own, but I’m sure he’s a boy”

Vets colleague “It doesn’t matter if he’s called Doris, but he’s a boy”

Now, it’s not that mummy wanted them to have baby tortoises, but she liked the idea of them being a couple and naming them after her grandparents. According to the vet, if mummy wanted to have females and males, she would need to have 2 females per male as the males are very ´persistent’ and tend to harass the females, so when they are with one, they leave the other one alone. This would mean therefore, that mummy would need to buy 4 females. Now, mummy had already managed to wangle two tortoises and quite a lot of square meters of the terrace, but there was no way loving husband was going to agree to another 4! So she would just have to hope that the boys were happy cohabiting together and that’s that.

Now came the big question – what should they call Doris? The answer: Txomin. Loving husband being Basque, means his grandfather not surprisingly, had a Basque name. Txomin and Arthur, hm, not exactly the same ring to it as Doris and Arthur, but never mind. Doris was not that impressed either and completely ignored everyone when they first started calling him Txomin. It took quite some months for everyone to get used to it and Doris, mummy’s nan was actually a bit disappointed when she heard that there was no longer a tortoise named after her!