Too nice to eat! 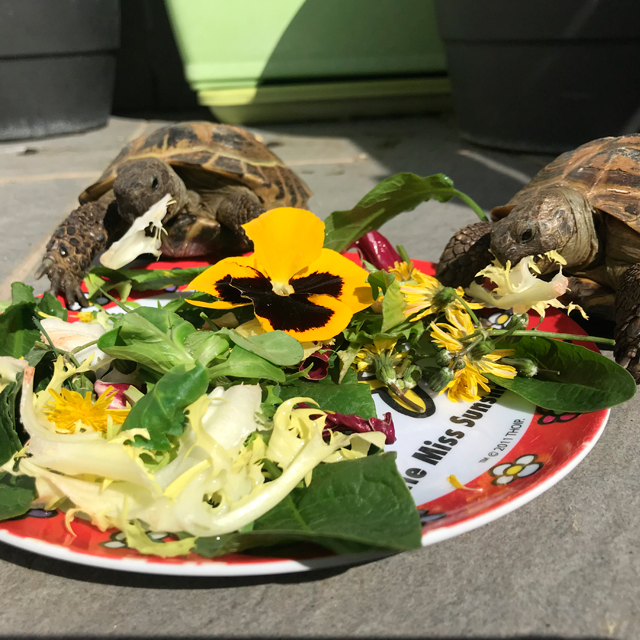 Recently it seems that Txomin and Arthur’s lunch looks more like it should be served in a restaurant (minus the Little Miss Sunshine plate) than to two tortoises out on the terrace! Trying to ensure they have variety and a healthy diet, though they are actually none too fussy, mummy’s daily routine now consists of picking weeds from near the house, selecting pre-washed tender greens from the fridge and adding some homegrown bits and bobs from out on the terrace. The once pretty pansies in the planter are all but nearly de-headed and some new planting is going to be needed pretty soon.

The resulting plates of food, minus the clover and dock leaves, actually look like mummy could serve it up on a dinner plate for guests! The boys, to lovely daughter’s disgust, seem blissfully unaware of how pretty their meals are and have actually taken to doing their business on the plates – with or without food still on them, which does seem a little ungrateful on their part. Lovely daughter is still refusing to eat off some of the plates even after various cycles through the dishwasher! She has also gone out and given them a good talking to, referring to ‘consequences’, though mummy hasn’t seen any being dished out yet and the boys don’t seen particularly repentant. Food is therefore, now tipped directly out on the terrace floor and the plates swiftly removed. If the size of the cacas they are leaving as presents all over the place is anything to go by, they are at least enjoying every last morsel!