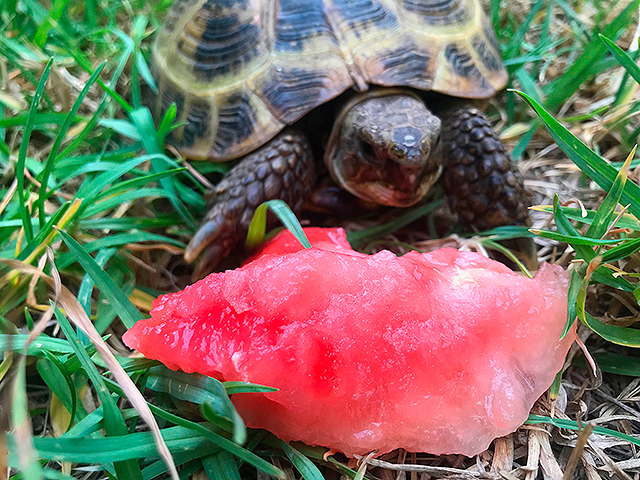 So, mummy met up with another shelled friend yesterday. In fact, this friend is actually one of the reasons that mummy decided she was going to have tortoises for pets (though she would claim they were for lovely daughter and not for her). 'Manuelita' - also a Russian Tortoises (Agrionemys [Testudo] horsfieldii) - had not shown her face during lunch, but sometime later when tidying up, mummy heard a rustling noise in the garden and realized someone was following her. It was Manuelita, who according to her owners, keeps herself to herself and disappears for months on end to hibernate. Every year she buries herself and they are never quite sure where, or whether she is going to re-appear. This year she didn't show-up until May! Txomin and Arthur had been awake for months by then, though they had woken up and gone back to sleep 4 times over a period of a few weeks due to the changeable weather.

Anyway, Manuelita looks to be some years older than the boys, looking at her size and weight and is a bit slower on her feet, but she did not relent from following mummy till she received some food. It seems she is also a fan of everything red; tomatoes and strawberries being a favourite. She had not though, tried watermelon, so mummy suggested that perhaps she may enjoy a slice, being that it was reportedly one of the hottest days of the year so far.

Manuelita did the same suspicious sniffing that Txomin and Arthur do. Being that they are super spoilt, they, unlike lovely daughter, are not forced to eat anything they are not that keen on, just because it is good for them, but anyway….. Manuelita ate a little, then walked away – mummy as you can imagine, was gobsmacked. The boys leave nothing – not a sausage, so mummy duly chased Manuelita and offered her some more – a few more bites and again, off.