Treats and being Spoilt 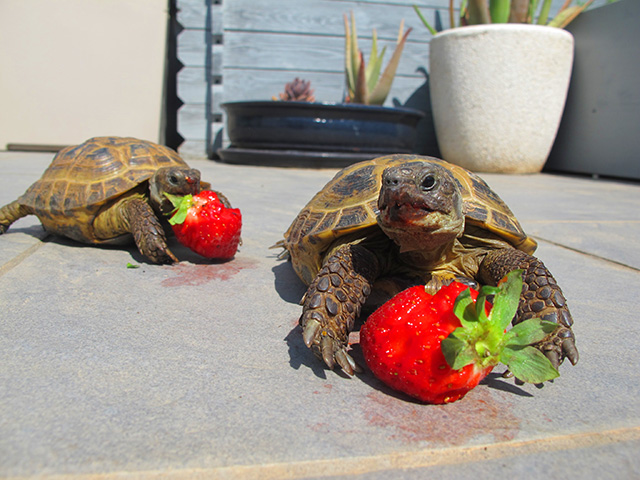 Unfortunately, mummy has moved and will now need to plant her own roses, but her ex-neighbour had an abundance of roses and Txomin and Arthur absolutely love rose petals. When they are out in bloom, mummy finds excuses to go visit said neighbour, in the hopes of returning with a bunch of roses. Lovely daughter is still not convinced about feeding them to the tortoises.

Strawberries and Watermelon - It is said that fruit in general is not good for the tortoises, but every so often, especially in the hot summer months, Txomin and Arthur devour the few small pieces mummy gives them. In general she has to force them to drink water and hardly ever sees them drinking from their water bowl inside their house. In fact, it’s normally when she forcibly bathes /showers them that they appear to actually drink; therefore, she thinks the odd bit of watermelon can’t do too much harm.

Peas - They love peas and because they are diuretic, mummy only gives them occasionally as she also thinks it is good exercise for them to chase them round the terrace.