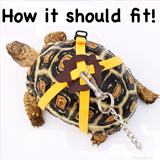 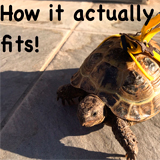 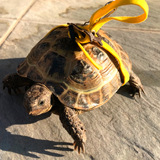 Mummy is a member of various Facebook Tortoise groups as you can always learn something new about your shelled friends and in these groups she can share photos of Txomin and Arthur and get nice responses from likeminded people. Anyway, in one group, someone had bought something very cool for her pet tortoise and always on the lookout for a gift for the boys, mummy found the same article on Amazon – where else?! –and quickly clicked “purchase”.

Mummy commented to loving husband what she had bought and he thought she was trying to pull a fast one as "who in their right mind would buy a lead for a tortoise?!" Well, mummy would and did - now she would be able to take the boys for long walks in the street and everyone would admire and coo over how handsome Txomin and Arthur were and congratulate her on such a fantastic purchase.

Fast forward to the arrival of the package and mummy excitably opened it. Note to readers, always read the small print and pay attention to any measurements provided, unlike she did - it appears that perhaps the leads were meant for miniscule tortoises only! Mummy was not quite sure how something so tiny would fit around Txomin or Arthur's shell but not to worry, she would give it a go and the boys would be hugely grateful to mummy and thrilled with their gift.

Arthur however, was actually pretty ungrateful and made sure mummy was aware of his distaste at his new gift. The bright yellow lead was indeed too small so mummy had to improvise and fasten it around only his middle as opposed to in a crisscross fashion. He of course wriggled as much as tortoisely possible and made it as difficult as possible. When it was on, he promptly refused to move and did a large caca which she hurriedly cleaned up before it got the new lead dirty. He then proceeded to walk forward, directly out of the lead, leaving it in a pile on the ground. Mummy tried a few more times, each with the same result.

So, the lead is a big failure! Mummy of course, was disheartened - for a short while, until another post on Facebook caught her eye – it seems that some people use rubber dog toys with holes in, to stick lettuce and weeds in so their tortoises have to work for their food. Fast forward 10 minutes and mummy is now waiting for her Amazon purchase to arrive – hopefully this time the boys will be more appreciative!