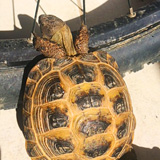 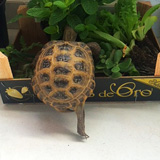 Txomin and Arthur actually went on their first road trip just 2 weeks after they joined the family. Loving husband was on assignment in India and mummy and lovely daughter were off for the weekend to see the in-laws at their holiday home in Cambrils, Tarragona. They were snuggled into their shoebox – obviously with lots of holes in the lid for breathing, but lid on to make it dark and to calm them – in the back foot well of the car so as not to move too much.

The in-laws have only a tiny covered balcony, so not much room to investigate, but there were a couple of bicycles that seemed to peak their interest and they tried to climb them whenever tMummy had purchased some fresh plants mummy to re-plant on the terrace, which were in small wooden crates on the floor - meals-on-wheels for the boys, who climbed in and helped themselves. It was amusing at first, but then mummy realized that they actually have no off-switch and can eat and eat until there is nothing left, so the plants were promptly removed.

The day after arriving, lovely daughter came down with chickenpox and instead of staying just the weekend, she and mummy actually stayed until the following weekend and were looked after by the in-laws, who made the whole experience just a bit more bearable. Lovely daughter got spots inside her mouth and ears and had a really hard time so it was nice for both of them to be looked after by lovely mother-in-law, who filled mummy with great food and kind father-in-law who filled mummy with good wine, whilst keeping lovely daughter company and her spirits up.

The tortoises however, were a bit bored by the end of the trip as the terrace really had nothing to explore other than the bicycles. Kind father-in-law did spoil them with food and conversation though, and this was the first of a few trips there and mummy is sure they look forward to the extra food and chats – and mummy definitely looks forward to the great food and wine- hic.