1st trip to the Vet 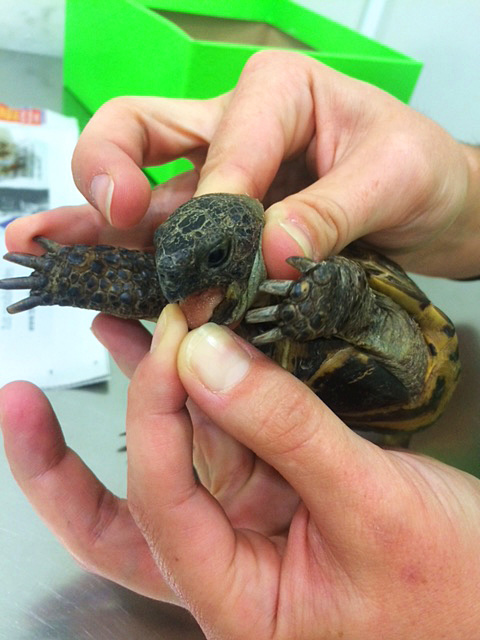 The tortoises had been with the family for 8 months and hibernation was looming over them, so mummy thought it time she went to the vets. On instruction, she took some caca samples with her so they could be tested for bacteria, though she needn’t have bothered - by the time they finished the short drive, the boys had kindly left several additional samples, including urine, in the shoe box they were travelling in!

The vet, who mummy initially thought must be the assistant as she looked so young she should still be sitting her higher grades at school, was very friendly, competent and this obviously wasn’t her first time inspecting tortoises. She explained that they are both strong and strong willed and if they don’t want to remove their head from their shell, they basically won’t. Hence her managing to hold the sides of poor Arthur’s head and dangling him just above the vets table until he gave up pulled his neck out and she promptly managed to open his mouth and inspect inside.

It was the first and last time that mummy has seen so far down into their mouths and this is not a manoeuvre she is confident enough to try herself! All good so far and the caca tests proved negative for bacteria – yay. Now Doris’s turn... To cut a long story short – which you can read in name change – Doris, quickly lost her femininity and became Txomin. It appears that the pet owner had actually sold mummy two males and not one male and one female as requested!

Anyhow, no bacteria, good length nails, healthy shells and approximately 8 years old by looking at the the rings on the plastron (underneath of the shell) and a clean bill of health – hooray, mummy was happy. She still finds it quite funny that the vets call their patients by the animal’s names and had to call out Doris and Arthur Smedley, which living in Barcelona, are not the most usual names and even made the vet giggle a bit.